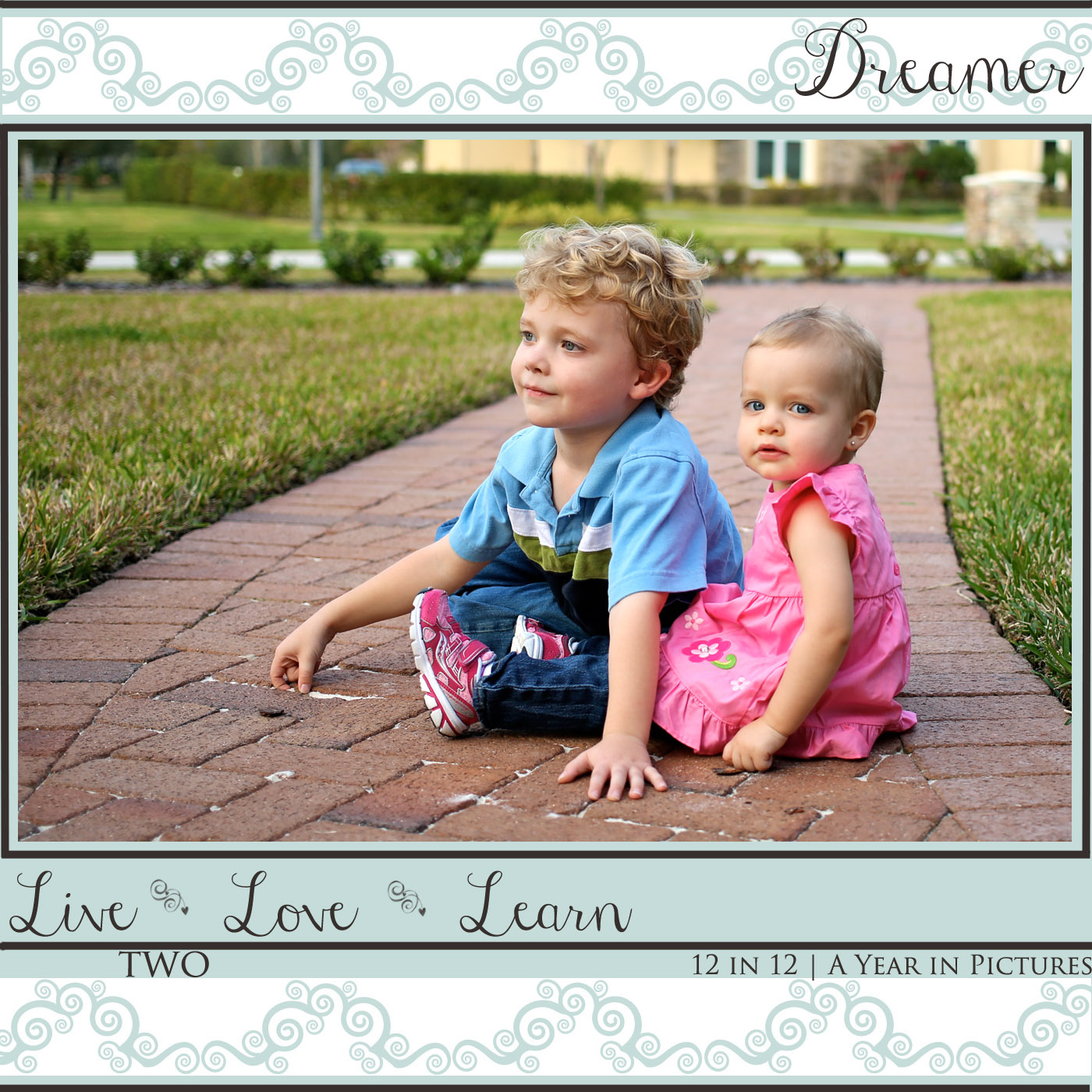 So a lot of thoughts crossed my mind when I sat down to do this. They were as follows: Woohoo only one day late! Crap, I haven’t taken many pictures this month. What was my theme again? Ick I don’t like my template anymore at all. What was I thinking doing this project again? Ooh Cake!

That last one was my early Valentine’s present 🙂

(I also discovered my site was hacked which annoys the crap out of me.)

Yeah it’s been a busy month and I’m ashamed that these were taken a couple weeks ago for family Valentine’s cards and that was the last time I picked up my camera. Oh well, sometimes life happens. I do so love this picture though. I love the innocence of children before they become jaded and convinced of all the ways life will slow them down or stop them. Right now Andrew believes the sky is the limit and Allison believes that her big brother is the greatest person on the planet. Perhaps they’re not far off but it’s nice to know that their dreams are still pure and untarnished.

Now next month I will do better about the pictures and maybe even tweak the template a little. In the meantime I’m updating my New Year’s resolution goals which I’m quite proud to say, are going extremely well. There is a LOT to be said for making yourself accountable to internet-land even if I do only have a few readers.

So my goals were to sew some things and read a bunch of books– 40 to be exact.

Since last update, I (with a little help) made two pillows for the playroom out of fabric that coordinates with the curtains. We’re going to get a little rug and a few more pillows and I ordered a bookshelf where the books face out. We have over 600 children’s books in our house so it is unreasonable to think I could display them all this way but I’ll rotate them out so the kids, especially Allison, will be able to enjoy them more easily. So that little project is going well! I also have more ideas on how to finish the playroom and master bedroom. Once we moved in and the “job situation” hit, we stopped buying anything and everything for the house. What you see in our house now are things we purchased before we moved (and largely paid off in full, thank God!) but after being on hold for 7 months I finally get to start decorating again!!

As for books, I’ve been reading a whole lot! I find it’s easy to get really addicted to reading and I can’t think of a better thing to be addicted to. I also noticed that Andrew’s doing a lot better with his reading and wants to sit and read with me in the evenings– not me read to him, him reading to me! I’m not sure if it just clicked or his teacher is working magic but he’s really made major progress as of late. Anyway…

10 books in a month and 12 days! I should easily break my goal. A few thoughts about these books.

Sarah’s Key is really sad but also pretty predictable. Probably the first and only time I’ve ever liked the movie better than the book. (Warning, the movie is in subtitles).
I LOVED Veronica Rossi’s books. I devoured them. I cannot wait for the next one later this year. I am stuck on young adult dystopian fiction at the moment. I’m tired of the same old sex filled boy meets girl fluff which seems to be in so many adult books. The YA Genre is very popular among my friends right now too.
I was shocked to like the Across the Universe series. It’s very Sci-Fi. Think, girl gets frozen and put on a space ship and spends a few centuries in space waiting to wake up on another planet. Yea. My thoughts too. But I REALLY liked these books.
I am not a huge fan of the Matched Trilogy but I’m going to finish them because I’m anal like that.

Ok off to read! See you next month!