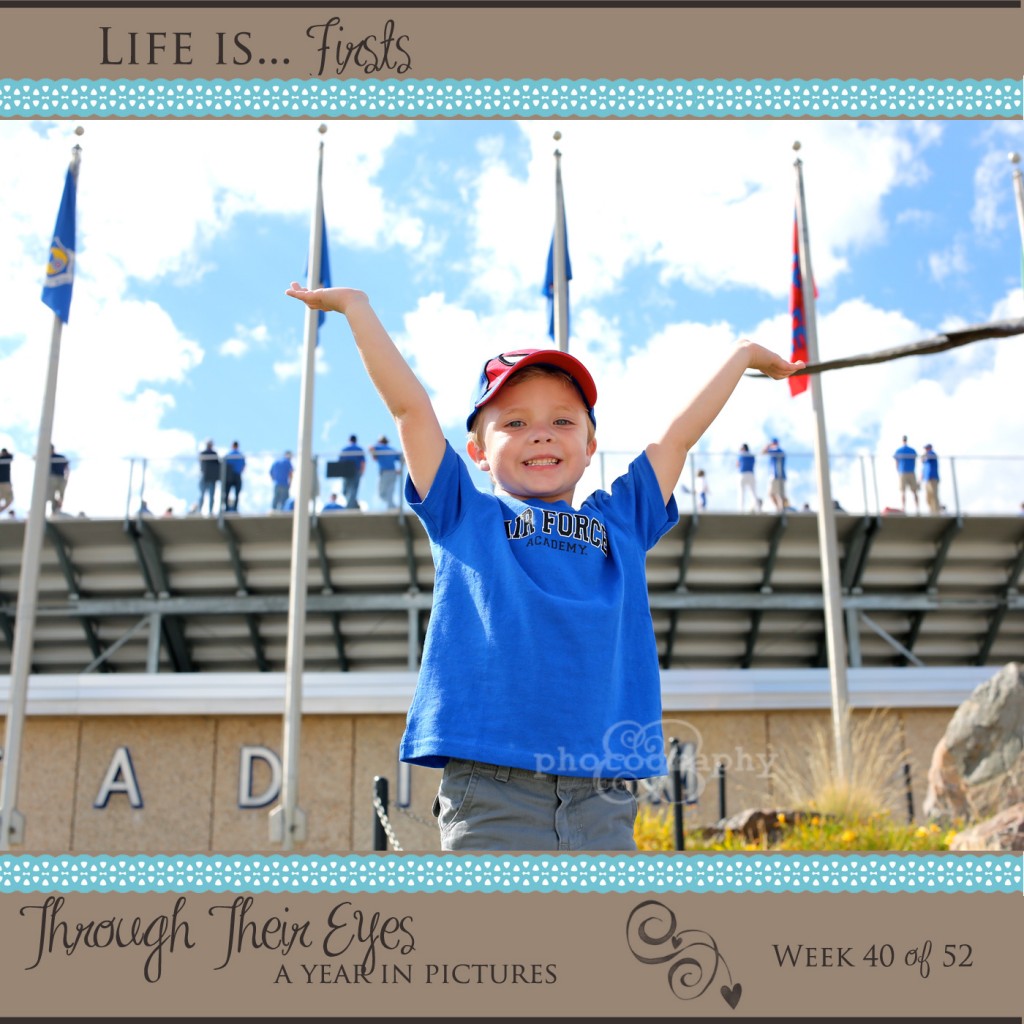 This past weekend was full of firsts for my kiddos. They got to do things that I (short of the first airplane ride) didn’t get to do until high school and even college. Yes, this was a big weekend for our family!

It’s hard to even fathom the life that has passed in the space of time since A graduated from the United States Air Force Academy back in 2002. It’s hard to fathom that we, as a couple, could ever look back on a place so filled with a roller coaster of emotions, and find peace and joy and even closure. I don’t think I have it in my sleep deprived mind to come up with the words to express what 4 years of being a USAFA girlfriend/fiance was like. They don’t call it the 2% club for nothin’, that’s for sure! But through my experience on the outside, I know it was NOTHING compared to what A experienced as a cadet at one of the most prestigious schools in the world. He did it because he is strong and determined and fiercely dedicated to his goals and serving his country. And we survived it together because of sheer stubbornness.

So to go back 10 years later and see beautiful USAFA… to go back 10 years later with our children… that meant something. It meant more than something. It was in many ways showing them the cornerstone of our family and maybe some day on some level they will understand that the foundation of our family was built in large part on that campus in the mountains. Because we used that experience to commit ourselves for the long haul and to solidify our knowledge that if we can get through that we can surely get through anything.

For Andrew and Allison it didn’t mean any of that. And even for A, I’m not sure how he felt either because he couldn’t quite put it to words. But that’s my impression of our trip– it was necessary, it was meaningful, it was significant.

And it was pretty darn awesome (if you take out the baby vomit from altitude sickness and the nearly missed connecting flight from having to sit on the tarmac for 45 minutes waiting for an open gate, oh and dragging 2 children, 2 small suitcases, 2 backpacks, 2 carseats, and a stroller on and off 4 airplanes– there, got that out of my system)! I had forgotten how incredibly beautiful Colorado is and I was able to appreciate it even more now knowing that we all get to leave the state together– nope, no good byes this time!! We started off our trip visiting the campus and showing the kids around some of the areas that were important to A including the dorm room he lived in while he was the Squadron Commander and the place where he attended all his classes, ate, attended church, and did his physical training. Then later in the day we attempted to drive to the top of Pike’s Peak (much to poor Allison’s dismay). We were stopped 6 miles short of the 19 mile drive due to a snow storm but we had a snowball fight instead that Andrew believes is the greatest thing he’s ever done in his life so far. The next day we saw a bit more of the Academy grounds and watched the noon meal formation which will make you think twice next time you simply stroll into a cafeteria, sit down and grab something to eat. We visited Garden of the Gods (aptly named for his incredibly gorgeous rock formations) and on our third day we went to the AFA vs CSU football game which, though I dearly love my Swamp, you can’t really beat the view of the Rocky Mountains in the background of the stadium. Andrew is fast becoming a perfect little football fan and is being well trained in the art of (4 year old appropriate) trash talking! And Allison said “touchdown” right on cue! Later that day we went to the zoo and saw all sorts of animals we’ve never seen “in person” before– a moose, a grizzly bear, and a snow leopard just to name a few. Finally, on Sunday morning we attended Mass in the cadet chapel before boarding our flight for our endless journey home.

I won’t lie. It wasn’t an easy trip. It wasn’t a vacation but perhaps that’s a small price to pay for understanding, remembering, and making closure on such a significant part of our lives. I’m glad we went and maybe, if I can get past the horror of flying with kids, just maybe we’ll do it again 10 years from now. Until then we have our stories and our pictures and hopefully we’ll be able to help Andrew and Allison understand, even a little bit, just how important our journey was in making us who we are today.