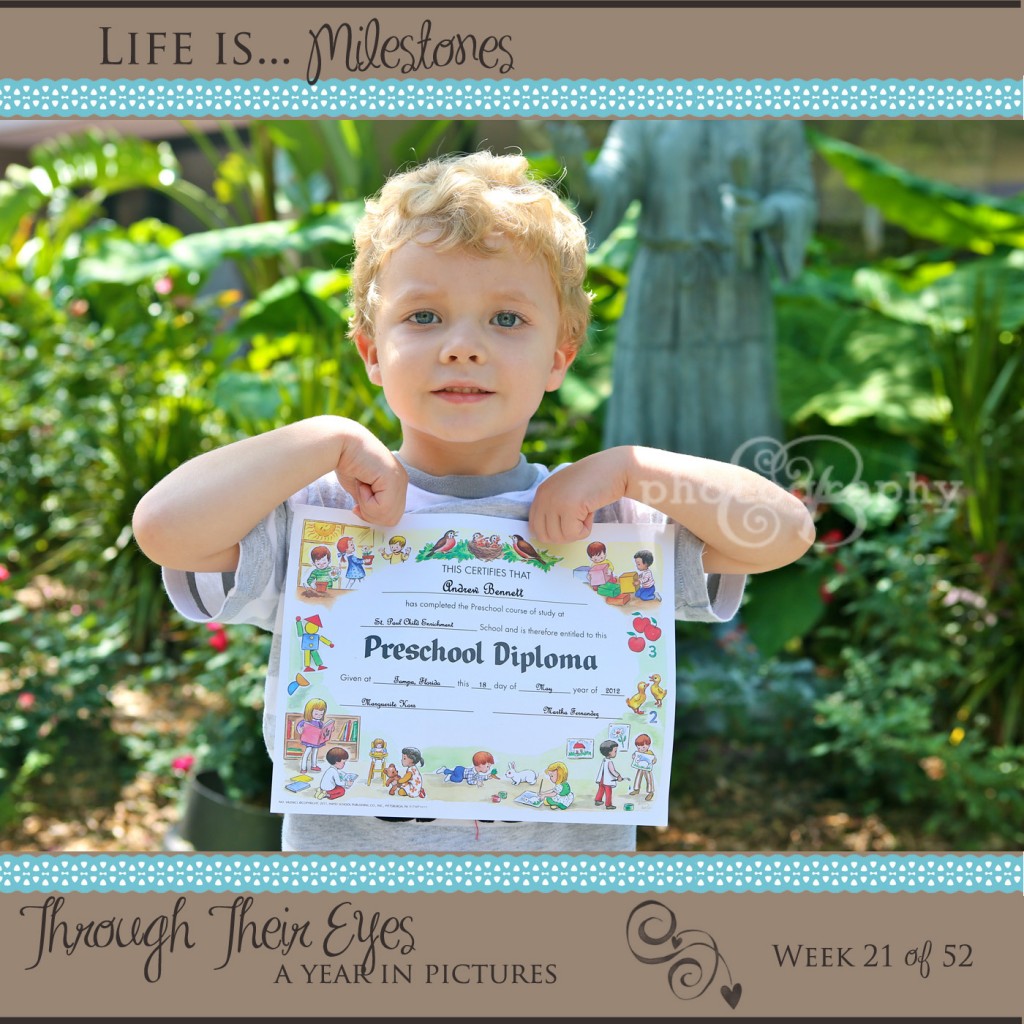 Life with infants revolves around meeting milestones. I know I’m not alone among moms when I say it’s something I think about and worry about. And once kids hit all those major ones like walking and talking you start to relax a little bit. So with all my focus on Allison (nearly walking now), I was almost blindsided by the emotion that hit me on Andrew’s last day of school.

I am in denial I think. I can’t believe he’s finished his first year of school. Five days a week from 8:15 to 2, except Thursdays when I picked him up at 11:30 for gymnastics. He missed only 3 days the entire school year– two by choice and one for being sick (must be some kind of record there). He made friends, he painted, he learned to write his name, he sang songs, marched in classroom parades, ran on the playground, he learned beginning reading and math skills, he played, he grew, and he won the hearts of all the ladies (old and young) in the whole school. I try not to over do it when I tell him I’m proud of him. But inside I’m gushing with pride. My baby is growing up!

So when parents were invited to come early for “Last Day Goodbyes” I thought it was going to be just that– good bye and early pick up. I wasn’t prepared for a mini graduation ceremony and reception, that’s for sure. Probably a good thing- I didn’t have a chance to get overly emotional about it. But it was adorable beyond measure. All the little ones were gathered around their teacher, these children who have spent every day of the week together over the past 9 months and who have come to know one another as well as they know their own family members. Their teacher called each child forward and presented them to the class stating two things– 1) what the child said was his or her favorite activity in the classroom and 2) what the child said he or she wanted to be when they grew up. As I’m sitting there listening to the other kids before Andrew, I kept wondering what he was going to say. Several months ago he had said he wanted to be Buzz Lightyear when he grew up and I’ll admit a part of me was hoping he wouldn’t say that after watching all the future doctors and firefighters and veterinarians walk up to receive their diplomas. When it was his turn, I listened as his teacher explained that Andrew’s favorite activity was playing with the cars center and then, in a softer voice she announced, “When Andrew grows up, he wants to be a daddy.” Cue melting hearts. Everyone “awwwed” and Andrew turned red and came over to hand me his diploma before sitting back down with his classmates.

You think it’s all about learning to read and write and make friends and then kids come back and remind you what really matters. He wants to be who he admires most. His daddy.

It was one of those moments you want to bottle and save forever because you realize that before you know it, you’ll be watching him graduate, driving him off to college (and hoping desperately that he finishes BEFORE becoming a daddy!) dancing with him at his wedding, and welcoming grandchildren. These mere moments are fleeting but singularly present in all that lies before us. To him it’s just one event in the course of the year. It means he gets to sleep later and go to swimming lessons with his sister. But these moments, like first words and first steps are not just milestones but the stepping stones that will carry us through whatever the future holds. And these moments make life worthwhile.