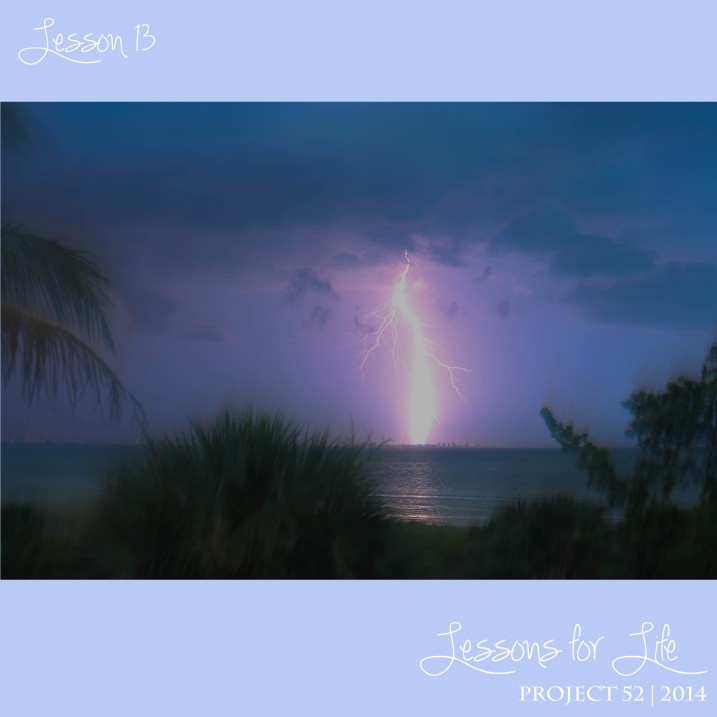 A combination of things happened last week that led me to experience some very powerful memories. I’ll explain: in the summer of 2004, after 364 days living in New Jersey, we drove my old blue Honda CR-V and a packed U-Haul trailer back home to Florida. Shortly before we left, we celebrated our 1 year anniversary. Shortly before that I took my dream job back home. And in the year before that I spent most of my time being sad, lonely, and saying goodbye to my husband who was constantly TDY (not there, for you non military folks). I say this to explain why my trip was one way while his was not. I think most anyone who knew us then and has seen us these past 11 years understood that it was a testament to how strong we were together that we agreed to live apart so I could have a career too. Thankfully that time apart was temporary but we didn’t know that at the time. And what I want to focus on right now is that transition in July of 2004. Moving home, back into my mother’s house, with my younger brothers. Taking a new job. Buying a house that I would live in alone for the first few months. Our trip to the beach. And that’s really where today’s story starts because since that time 10 years ago we’ve gone to the beach every single year and before that time 10 years ago we went to the beach most every summer before that too. So it’s amusing that every time we go, no matter where we go, my mind focuses back on that summer. I think it’s because that summer more than any other transitional time, felt like a dividing line for me. I was no longer a student, nor was I just a wife (not that there’s anything wrong with that), but at that time I got a new title- Teacher. And despite everything I was happy.

That summer also brought four back to back to back to back hurricanes that pummeled our state. That was a terrifying summer for that reason alone. I hope never to experience that again although I know it’s ridiculous to think I never will. I started a new career then. I remember so many things like having to scrape together money to buy a few professional looking outfits, and sitting in my childhood bedroom at night rehearsing my lessons in my head until I knew what I was going to say. So much is so clear in my mind, even though it was really quite some time ago.

So what’s all this about? “You’re rambling,” you say. And I am. But I’m trying to make a point. Because all this feels like it happened in another life. In that time we’ve been married 10 additional years (for a total of 11), we’ve had 3 living children and one angel twin. We’ve lived in 2 different homes. We’ve adopted 2 additional cats (total 3). We’ve collectively worked for 5 different companies. We went through one deployment and 230,000 miles worth of business trips. I took one trip to Europe and am planning another. Together we have accomplished many things in that time both as a family and as individuals.

And on the very back burner there has been a simple little goal. Nothing life altering, just something I wanted to do.

You see before I moved home that joyful July of 2004, I took a class at the local community college in New Jersey. Just to be clear here we had zero money. Our daily no frills living brought us into debt. I paid for the class using money I got for my birthday. It was a B&W film photography class and it was one of the best things I’ve ever done for myself. I unlocked the mystery of film photography but the instructor unlocked one more mystery for me (oh, I see Emily, you’re finally getting to the point!) Yes, he described how one would photograph lightning. In those 10 years I’ve owned 1 SRL and 3 DSLR cameras. Every summer at the beach I bring one with me with the hopes of catching a lightning storm with just the right set up and every year it doesn’t happen.

Except when this summer it did.

So this lesson is really easy– STICK WITH IT! You see how much has happened in that time? I am a different person now than I was then. I have done so many other, frankly more important, things and yet I held on to that one goal and I waited patiently and my time came. I did it! I am pleased with the outcome, indeed! There is nothing that feels quite as good as crossing a goal off your list. I listed this as a New Year’s Resolution last year and this one and guess what– it’s DONE!

Now a bit about the picture. For those who, like me 10 years ago, always felt that lightning photography was kind of a mystery- or who never bothered to google it, there are a few things to know. To photograph lightning you need an SLR camera where you can control the shutter speed completely. You need to set your camera to “Bulb” mode. If you’ve see that and didn’t know what it was for, basically it lets you control the opening and closing of the shutter by hand. For this reason a tripod is essential. I of course, didn’t bring my tripod this time because space was rather limited. I rested my camera on a cooler balanced on a balcony (camera never left my grip, I’m not insane). It’s also really helpful to have a remote switch which I did have with me but it was so windy it would have hardly made a difference. Next, the set up- it’s not that lightning storms are hard to come by, especially in Florida. We have them a few nights a week. But at home there are street lights and other ambient light that prevent total darkness and if you’re going to open the shutter for 15-20 seconds at a time, thus letting in gobs of light, you really need it to be as dark as possible. In the picture above it wasn’t really as dark as it should have been but I was torn between wanting to get the shot or missing it completely when the storm was overhead. I will post my other picture below– it was darker but the bolt not as impressive. Anyway the beach makes a perfect backdrop because over the water there are next to no lights and because of the sea turtles, far fewer street lights as well. So I had the location all I needed was the storm and boy did we have one! I didn’t have the greatest vantage point because a building was blocking the bulk of the action but I got what I got. At one point I walked down to the actual beach– pitch black, ferocious wind gusts, and not another soul out there. I’ll admit I was scared but I only turned back when it started raining (can’t get the gear wet!)

The above shot was edited down 1/3 stop as it was a 20 second exposure which could have been shorter. The shot below was a 2 second exposure. Both taken at f5 100 ISO, bulb mode. 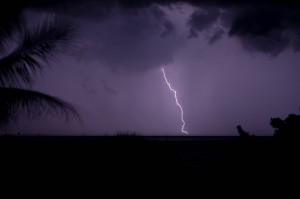