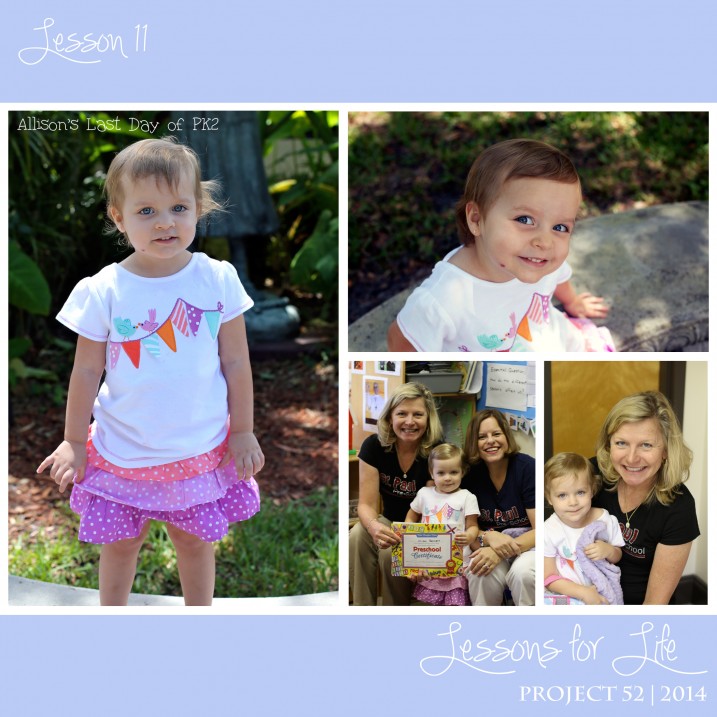 So I’m a little behind (as if that weren’t readily apparent with being on lesson 11 in the middle of May) but I couldn’t pass up an opportunity to talk about school in a lesson themed photo journey.

I’ve also been trying to find the right words to write a post about Allison since a while back I wrote about Andrew and another time about Molly. I like to try to keep things as equal as possible around here but even though the words are in my head and in my heart I just don’t know how to get them right in the black and white.

I actually wrote something out at the beginning of Allison’s school year in filling out a questionnaire that I wish I could have back. It really spelled it out perfectly. How do you put to words, feelings that describe someone you love the way I love her? Where do you start? I guess you start here: Allison is the baby girl I never thought I’d have. She is the child I had the hardest time convincing God to send us. She was the baby girl I was so convinced wasn’t really a girl I never even told people which gender 5 ultrasounds had told us we were having. She’s a spunky little firecracker who is half rough and tumble pirate and half princess. She is my light and my miracle.

I just simply can’t say anymore than that. It’s all in there but it’s just not coming out. You’ll have to make do 😉

I wasn’t sure about sending her to school this year. I did it anyway for three main reasons- one, it was a lot easier to get her into the program last year while Andrew was still at the school than it would have been this year to get her in to the 3s program. It was nearly filled completely before admissions became open to the public. We got the class we wanted for next year and she got a whole extra year there by doing it. The second reason is that having a late August birthday puts her nearly a year behind some of her future classmates. I figure now that she’s gotten an extra year of school most kids don’t have, she will be on a more level playing field. Finally, I can’t express how much I love this preschool!! Incredible people run an incredible school!! I wish I could go to school there!

What I didn’t expect (but should have) was that she would grow up so much both physically and emotionally in just a few relatively short months. It wasn’t even in an academic sense although she learned a lot in that area too– colors, shapes, songs, you name it. It always just blew me away to pick her up each day and hear her talking like a “big girl” instead of the baby girl I sent to school that first day. I love who she is becoming as she grows and develops her personality and I love that she loves school.

I told you Andrew that the best thing in life is learning and filling your brain with knowledge. I told you your brain always has room to learn more things. Knowledge to your brain is like chocolate chip cookies to your belly. Yum! School might be out (or almost out) but I promise we’re not done. There’s so much more out there to discover. Adventure awaits!

Finally I wish to add one last note– see that little purple blanket in the bottom two pictures? That’s lovingly called “School Ba-ba” because we made it out of scrap fabric to go to school with her the first few weeks. Well it has become a daily thing. On the last day of school she had left it on a chair and as we were about to leave her friend rushed up to us with Ba-ba in her hand to make sure Allison didn’t forget it. It kinda was it’s own entity within the classroom. At this point I think it will go to college with her. Maybe I’ll be wrong.