I’ve written this post about twenty or so times in my head and what you are seeing now is a very abridged version of it because I decided most of this is better left in my head. There are some who would say even writing this is too much, too personal, too much information but I’m not writing this for most people, I’m writing this for the people who are experiencing what I did and who are right now turning to Google looking for positive and hopeful stories. Because that’s what this is—a story of hope.

Around this time last year I started having dreams about twins. Twins don’t run in my family despite what I may have told a few people. They don’t. Plain and simple.

In the middle of February I was shocked to learn, not that it was twins—It was, that just wasn’t the shocking part—it was a shock to learn I was right.

I don’t want to go into a replay of that day or how I felt because even now it still sometimes feels completely raw and I still see all the events unfold as they happened moment by moment, a nightmare. Plus, I know that I’m in no way unique in what I experienced. Sadly, most people I know have been there even if not for a loss of a twin. Mostly I saw that image I had of my family, the one that started forming months before I was even pregnant, change from 4 children to three.

Except that image, even as it was forced to evolve in those weeks and months following that awful April day, there was still the unknown of what would happen next. Would I ever meet my remaining twin? I turned to Google. Bad idea.

There should be some sort of app that blocks all pregnancy related searches during pregnancy. It would be somehow connected to the pee stick—two lines appear and you get a congratulations message that also says “Sorry, you’re banned from Google for the next 9 months”. But you know I didn’t stay away. What I read didn’t make me feel any better either.

The question that plagued me was how the loss would affect Molly in the long term. I read about something called Womb Twin Survivor Syndrome. A lovely list of problems that Molly might face ran constantly through my mind—not easily fixed problems, problems that are ingrained and permanent. I had already lost one baby but would the remaining one live a life of constant sadness as she felt the sense of loss to the person she was most connected to? I kept wondering, what was it like to be there and know the moment the heartbeat next to you stopped? There had to be something that she noticed inside her, even as a tiny tiny fetus, she had to have felt something. Science says she knew something happened and changed in that moment. And she was all alone.

So I waited. I tried to push those thoughts out of my mind. I know a couple people who have lost a twin and I looked for clues- their children seemed fine, seemed happy and well adjusted. Would I be lucky enough to experience the same? I waited the remaining 6 months for her birth and then I waited some more.

And then one quiet afternoon on the day Molly turned 3 weeks old something incredible happened. She smiled.

I know what you’re thinking; she’s three weeks, that’s too young for a real smile. It must have been gas or something. But I assure you I know the difference now between a real smile and gas. I also know it was real because I have gotten to see it almost every single day since then. It took my other kids much longer to show their first real smiles but not Molly, not my precious gift who knew more than anything her mama needed to see that she was happy. And she is happy. She’s calm and content and filled with this vibrant spirit and I know that she’s going to be okay. And I’m writing this for anyone else who is Googling and wants to know that there are stories of hope out there. There are. Molly is one of them. 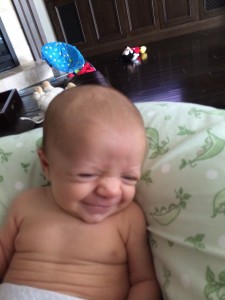 I’m definitely no expert on womb twin survivors. I just did some basic reading on the web. But we decided to make sure, when the time is right, that Molly knows her story. Hopefully this will help her in the long run.