Shit, yes, of course we’re going to be late. Because your school is on the other side of the world and we had 20 minutes to get everyone out of the house and fight rush hour traffic.

“Am I still going to be on the morning show!?”

We pulled into the parking lot and I jumped out with him. He’s the youngest Kindergartener in the school but not even remotely shy. I didn’t go with him because he needed me there, I think I went more because I needed him with me—to help me find the right place on the huge campus. We raced up the stairs to the Media Center and once someone spotted him they pushed him through the crowd of people and other students—one student per class for each of the 9 grades.

We barely made it but he got his shining moment, saying his name loudly and clearly into the microphone and smiling handsomely as the administrator read why he exhibited the attributes of Enthusiasm and Curiosity in the classroom. It was in that moment as I watched him, fighting back the tears of stress and lingering baby hormones, that I thought to myself, who is this child? How is he mine? How did I get so lucky to be his mom?

He’s everything I never was as a child.

I would have been terrified to stand up on camera in front of the entire school. I would have been paralyzed with anxiety over being late. I would have died before walking in last and having everyone stare at me. But even before that, I wouldn’t have even wanted to go to a school as big as his. In fact, I didn’t attend a school that size until High School. He has more confidence packed into his small, five year old body than I’ve ever had in mine. Ever.

Forget Disney world, soccer goals, or new siblings. That moment right there, was the greatest.moment.ever.

After the awards were given out, the kids got a pencil and a rubber bracelet as well as juice and a donut before they posed for pictures. As he was eating, his class walked in for their library time. That’s when the donut and photo op were no longer important.

As the kids walked past I kept hearing, “Hey, there’s Andrew” “Hi Andrew!” “We saw you on TV!” They waved, the smiled, the wanted him to come join them.

More realization. Not only is my kid confident, he’s popular. Geeze, would he have even noticed I existed if he met 5 year old Emily? The kid who was probably crying in the corner? But I already know the answer to that- it’s yes. Yes he would have noticed because he notices everyone. He’s that kid who doesn’t want anyone to get left out.

We walked out of the school that morning and I breathed a small sigh of relief. It probably won’t always be easy for him (actually, I hope it isn’t). But I’m glad he didn’t inherit all of the parts of me that I didn’t like about myself. I’m glad he’s not those things I never really wanted to be in the first place and I find myself learning from him more than I ever dreamed a parent would learn from a child. 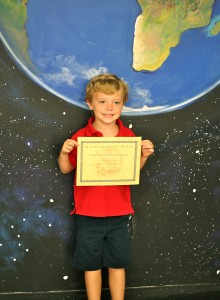